Social Media Hacking: Who is at Risk and How to Avoid It?

Today everyone has a social media account, or to be more objective, a number of those. And it could be said that it’s fine, it is about the development of communication between people, but the truth is, it has drawbacks too.

The thing is every social network sets the undeclared goal of extracting as much information as possible from its members. And having disclosed some of your private data to the public, you can control neither its further usage nor people who access it. This already puts you at a certain risk.

But one of the most dangerous things in our time is when your personal data gets stolen or simply accessed without your permission. Why? – Because as a result of this, both ordinary people and companies lose tons of money, get into huge debts, get deprived of reputation and sometimes even any hopes for the future.

In this article, you will get a closer look at the problem of cybercrimes and how to avoid them. Read it carefully and remember, today it’s many times more common to become a victim of social media hackers than to get into a car accident!

The Most Common Types of Cybercrimes

Online threats can be of quite many different types, but the most common of those are:

This means getting direct messages on social media with requests for help or other kinds of immediate action. In this situation, criminals rely on the specifics of human nature: urgency is going hand in hand with the panic mood and panic is always about fear. Such messages can come from spoofed accounts of your friends on social networks. Some of those can also contain links that are hard to refuse to click on and that in many cases lead to downloading malware from unsafe sites or leakage of important personal information.

In the case of this cybercrime, fear is also used, but here it gets facilitated with a spoofed highly authoritative website. Seeing an authoritative site’s name accompanied with a certain warning on its user’s account in the email heading, the receiver can get tempted to open it. If he does so a malicious link will meet his eyes, and if he doesn’t think twice and click it he will regret it many times.

It can concern either your plans for the near future or personal details that could hint at your passwords. In both cases, your security is under the gun, but the most dangerous is the second one. That is why it’s advisable to avoid disclosing unique personal data such as the name of your school or your child’s first name, etc.

And if you’re a student, you can research this topic deeper and prepare the work that would be in line with these law essays examples.

Either ordinary people or celebrities, small or big reputable companies have equal chances to get attacked by social media hackers. And if you think you’re rather not attractive to those guys, you are completely wrong. Although, you are wrong if you think that big renowned companies are definitely immune to cyberattacks.

Maybe, you could not have ever imagined that such things are possible, but even the United States Central Command and Amnesty International were attacked by social media hackers! This is to say that no 100% effective tactic against hacker attacks has yet been invented, as even these giants became victims of cybercrimes!

Should you want to investigate victims of cybercrimes more or craft serious academic work on this topic, you can refer for research proposal writing help.

How to Protect Your Accounts

Though till this day, your cybersecurity on social media cannot be protected once and for all, you can substantially lessen the chances of getting into this unpleasant story by accomplishing these simple two steps:

Get Control Over Access to Your Social Media Accounts

It’s also known that sometimes a company’s ex-employees, especially those who lost their jobs, not of their own volition, can hack social media accounts such as Facebook of the company. That’s why the wisest solution here is to remove ex-employees’ access to the company’s accounts once they leave the company.

Get Early Notifications on Suspicious Actions

The earlier you can take action the better, and it’s out of any dispute. It’s not always obvious at once that your accounts were hacked, but anyway, some specific hints on that can be detected. And if you’re on time with changing your password, your account will be saved. So, you’d better not grudge the time for installing the specific app on your device, to be able to take action on the go and leave hackers no chances!

Cybercrimes have become very common today and social media accounts are their first and foremost targets in most cases. And no one is bulletproof against hacker attacks, even if it’s about huge recognized brands. Still, you can cut your chances to get hacked if you take the simplest actions described in this article.

It’s needless to say that Instagram is the most widely used social media platform these days. You can…
byJanvi Panthri
8 shares
7
0
1 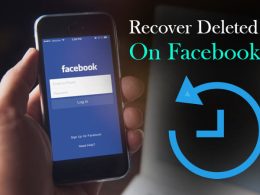 Have you inadvertently deleted a Facebook post and are unsure how to retrieve it? Don’t be worried; you’ve…
byJanvi Panthri

How to Fix Issue of No Sound on YouTube?

Is Your Facebook Not Responding? This Exclusive Guide Will Fix It

It can be very frustrating when we lose the only source of our daily enjoyment. No, I’m not…
byJanvi Panthri
error: