Learning » Easy Ways to Memorize the Difference Between Enantiomers and Diastereomers

Easy Ways to Memorize the Difference Between Enantiomers and Diastereomers

Stereochemistry is defined as the “examination of multiple spatial arrangements of atoms contained in molecules” in the field of chemistry.

Stereochemistry is the systematic presentation of a particular branch of science and technology, which generally demands a slight detour into history.

Stereochemistry is also known as’ space chemistry’ because it deals with the spatial configurations of groups and atoms in a molecule.

Stereoisomerism is defined as “the isomerism generated by non-similar configurations of functional groups or atoms in space that belong to an atom.” These isomers have similar constitutions but different geometric arrangements of atoms. Stereoisomers are divided into enantiomers and diastereomers.

In this article, we will Distinguish Between Enantiomers and Diastereomers.

Diastereomers are compounds with the same chemical formula but are not superimposable or mirror copies. Diastereomers are stereoisomers compounds that contain molecules that do not mirror reflections of one another and cannot be superimposed. When you look at the cis and trans isomer structure, you can see an excellent example of diastereomers.

Diastereomers frequently contain molecules with ring structures. Consider two compounds with a six-membered ring, two substituents, an ethyl group, and a chlorine atom. They have not mirrored images as in the previous example, defining them as diastereomers.

Diastereomers of Erythro and Threo

Stereoisomers that do not mirror images are referred to as Diastereomers. They are geometrical isomers or compounds with two or more chiral centers. If the Fischer projection of a diastereomer exhibits comparable groups on the same side of the molecule, it is termed erythro. If similar groupings are on opposing sides of the Fischer projection, it is called threo.

Difference Between Enantiomers And Diastereomers

Except for interactions with eight and other chiral substances, all enantiomers have identical physical and chemical characteristics.

Diastereomers have at least two stereocenters.

Diastereomers do not all pass the optical activity. They do not rotate at the same angle.

Diastereomers have a variety of molecular shapes.

Stereoisomers are optically active among structural isomers and stereoisomers due to the presence of chiral centers. The main distinction between diastereomers and enantiomers is that the former is not a mirror image, whereas the latter is. So in this article, we wrote about the differences between enantiomers and diastereomers.

Read more articles to understand the difference between enantiomers and diastereomers in depth. The science of chemistry is intricate where the characteristics of every compound differ. Ensure you have your facts in check. The Food Corporation India (FCI) recruits’ various candidates for technical and non-technical positions. Amongst which Managerial position is…
byElle Parker Sometimes studying forces a student to give up valuable hours of sleep needed for recuperation. Those who are…
byAbby Hill 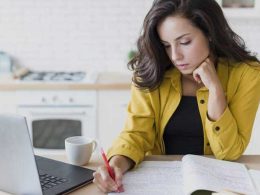 How to Write an Excellent Personal Essay?

While it may seem difficult to come up with an original and interesting essay, this guide can help…
byZayn Tindall
error: