Apple » iphone » What is Jailbreaking? The Pros and Cons You Need to Know

Apple » iphone » What is Jailbreaking? The Pros and Cons You Need to Know

What is Jailbreaking? The Pros and Cons You Need to Know

If you are not familiar with the term jailbreaking, then this blog is for you. Any owner of an iPhone, iPad or iPod Touch has at least once heard this word. And anyone who is interested in IT, too, probably knows this concept. However, as usual, not everyone who has heard the word knows its meaning (usually – due to lack of interest). So what is Jailbreak? Keep reading and we’ll try to give you an informative answer.

In simple terms, jailbreaking is a process that allows you to unlock the full potential of your Apple device. Essentially, it involves removing the restrictions imposed by Apple Inc. on iOS devices and allows you to run software that is not available on the App Store or install system tweaks that are not allowed.

More specifically, when you use an Apple device, you only get access to certain aspects of its hardware and software features. But if you jailbreak it, all these restrictions are removed, and you can download various apps that have not been vetted by Apple, or change the system settings to suit your needs. The main reason people choose this route is that they want to get more access to their devices for free without restrictions b by Apple’s app store. However, jailbreaking is not without risks.

The first important advantage is the third-party app stores. The leader among them is Cydia. Cydia has a lot of applications that, one way or another, failed to make it to the App Store. Most of them are free. With Cydia, you can also install themes for your mobile device.

Moreover, some of the apps in Cydia allow you to customize your Apple device in ways that were impossible before. You could change icons, fonts, and other visual aspects of your iPhone or iPad to give it a unique look and feel.

Another advantage is more control over settings. By jailbreaking, you gain access to system files and settings – something which was previously off-limits. With this increased control comes the ability to tweak various parameters such as battery life, animations, and system performance.

The main disadvantage of jailbreaking is security issues. Since jailbreaking involves tampering with iOS root folders, attackers using the phone tracker app can hack into your iPhone to exploit any remaining vulnerabilities. This can lead to data leaks, malware attacks, and other malicious activity.

It’s also important to note that jailbreaking voids your device’s warranty, so you won’t be able to get it serviced if something goes wrong. Another issue is instability – since iOS isn’t designed to run custom software and tweaks, there’s a possibility of conflicts between the jailbroken elements and system files which can lead to undesired results such as crashes or memory leaks.

Finally, Apple has made sure to lock out some features of its ecosystem from those who decide to jailbreak their device, including the ability to use official App Store apps and make purchases within the store.

How to Jailbreak Your iPhone or iPod Touch

Actually, there are different methods to make a jailbreak, it depends on what kind of jailbreak you want to make and what iOS version is installed at the moment. If we’re talking about newer versions of iOS, like iOS 16, then the most popular method is to use the checkra1n program. The way it works is simple, you just have to connect your iPhone or iPod Touch with a USB cable and run the application on a Mac computer (it is currently not available for Windows).

The basic step-by-step principle regardless of the method is:

How to Remove the Jailbreak?

If you’re not happy with the jailbreak or want to remove it for any reason, that process is just as simple.

As you can see, jailbreaking your device is relatively easy and can have some major benefits. That said, it isn’t without risks. Jailbreaking may give you access to unofficial apps and tweaks but it also opens you up to security vulnerabilities. Additionally, if something goes wrong with the jailbreak process, or you don’t like the results, removing it can be a hassle and may require a restore of your device back to factory settings.

Ultimately, whether or not you decide to jailbreak depends on your own personal preferences and risk tolerance level. Weigh out the pros and cons carefully before taking the dive! Good luck!

Table of Contents Introduction How to Add Gmail to an iPhone Mail? Method 1: Automatic Gmail setup for…
byAkansha Singhal
7 shares
7
0
0 Everything You Need To Know About “Notification Silenced” Issue on iPhone

What Do You Need to Explore While Seeking iPhone Repair Services?

There are many things to explore if you are looking for iPhone Repair Services near you. A reputable…
byLouise Simon 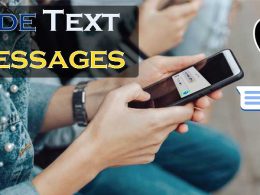 8 Methods to Hide Text Messages on iPhone From Sneaky Eyes

Is there a way to hide your personal text messages on the iPhone? You might be asking this…
byKanika Singh
27 shares
27
0
0
error: