Is Blockchain a Decentralized Database?

The trading relationships are often value-based and financial, and data transparency is imperative. However, many misconceptions about blockchain need clarification for its full advantages to be realized. There are many platforms like bitcoin buyers which can let you trade bitcoin easily and at the same time safely. The below-mentioned portion discusses what blockchain is not, what it is, how it works and how you can use it. The article also discusses some cons of using blockchain and provides valuable resources to learn more about this technology.

What is Not Blockchain?

Blockchain is not a database; it is a Ledger that makes the best utilization of the best encryption techniques and cryptography to maintain and append records to the ledger. The ledger is replicated and updated every time there’s an update in any of the records on the distributed ledger.

The shared nature of this ledger makes it extremely difficult to compromise any record on it because of its widespread presence across all the nodes (in comparison to a centralized database, which has only one copy). It is not reliant on a central authority to operate, and its consensus algorithm ensures that any node on the network can verify the data.

The update process can be done in parallel through multiple groups, preventing anyone from gaining control over it. In addition, distributed consensus ensures security against the alteration of any records since they are replicated and maintained simultaneously by thousands of computers globally, which cannot be tampered with or modified by an individual node.

How can a Business Use Blockchain?

Centralized databases are prone to manipulating data as a single entity controls it, making it easier for manipulation. It ensures a level of security for organizations as well as executing transactions by automatic means. While there is a need to start with small steps and ensure safety, the benefits of using blockchain are significant and should not be ignored. U

Some of the Significant Benefits of Blockchain Include:

● High-level transparency in business decisions as all transactions can be tracked by the user on a single ledger.

● The more complex logistical chains become, the more complicated it becomes to manage them; therefore, blockchain could prove to be a strategy for simplifying this process.

● All transactions made have no loopholes, which means potential for reduced fraud and manipulation by third parties.

● Reduced cost of transactions by eliminating the duplication of the same information in multiple databases (possible when existing systems are centralized).

● Disruptive impact on existing business models since it allows for better scale and increased efficiency of an organization.

● Records still reside in a single location and are easy to audit across an organization.

● Blockchain cannot scale as quickly as transaction volumes increase without using further infrastructure to store it. Blockchain does not replace traditional back-end platforms like SAP or Oracle. It can only be used as a complement to these systems, like using cloud computing to accommodate global client demands.

● Blockchain requires a lot of collaboration between companies to prevent fraud and manipulation as a single source of truth.

● Distributed systems like blockchain are challenging to scale. It means that transactions are slow, and therefore businesses need to rethink their existing model of running businesses with this technology. They will have to ensure they can handle the anticipated growth in transaction volumes or find ways around this issue with technology such as Lightning Network or Raiden Network.

● the technology is new; therefore, few industry players have started testing blockchain in their systems. However, as the technology matures and becomes more widely used, users will add more features to improve its effectiveness.

● the technology has to be tested in a realistic scenario to prove that it can be effective in the industry and beyond.

● Many companies are working on further improving and implementing the technology on their existing platforms. In addition, they are working with developers who have already built blockchain applications for other industries. Therefore, it is not as difficult as people believe. Furthermore, tools such as DevOps, containers, and cloud computing provide a suitable platform for developing applications with blockchain features like smart contracts.

● across many industries, few jurisdictions provide legal protection against intellectual property theft or cyber-attacks. In these cases, users cannot use blockchain technology effectively to store sensitive data because it could be used by criminals to steal information without legal repercussions. How to Choose a Crypto Wallet

Before buying or mining treasured cryptocurrencies, we register an electronic wallet. To choose the right crypto wallet, let’s…
byRyan Green The blockchain industry is constantly evolving, and every day some absolutely incredible story happens: either McAfee is extradited…
byRyan Green 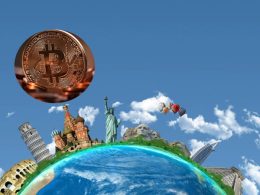 Benefits of Paying With Crypto for International Travels!

Cryptocurrencies do not have a shortage of use cases. It is because they are available everywhere and have…
byRyan Green Stablecoins to Invest in 2023

Amongst the digital assets, stablecoins are slowly making their mark and becoming famous globally. They are those cryptos…
byRyan Green
error: